A new video circulating the internet shows the moment COVID-19 Task force officials bust into a wedding that was happening in a church in Cross Rivers state. 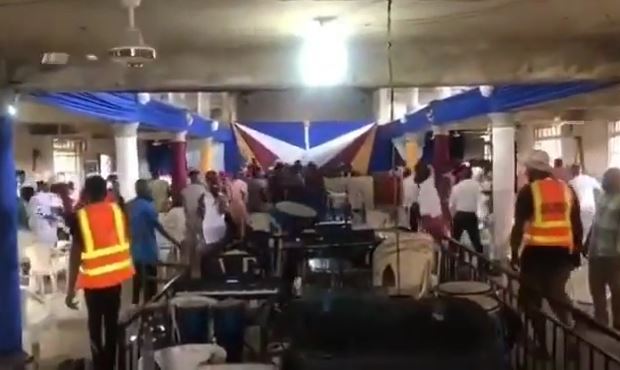 According to reports surrounding the video, the wedding that breached all rules of social distancing, with some guests seen without using face masks, was held at a branch of The Apostolic Church, Calabar, Cross River State.

The COVID-19 task force officials are seen making their way into the church while the event was going on but as soon as they were spotted by the guests, the guests took to their heels to avoid being arrested.

The bride and the groom who were still on the altar were later seen making their way out of the Church before the task force officials went to confront a man, supposedly the leader of the church.

Watch the video below,

On News!! Mother And Daughter Graduate With Medical Degrees On The Same Day (Photos)

On News!! Nigerian Man Shot Dead In Front Of His Girlfriend In Rivers (Photo)

On News!! Nigerian Wife Weeps And Begs Husband To ”Come Back” As His Body Is Bundled After Dying From Coronavirus In Brazil